Principle Component Analysis (PCA) is a powerful tool that can be used to create parsimonious representations of a multivariate data set. In this post I’ll code up an example from Dan Wilks’ book Statistical Methods in the Atmospheric Sciences to visually illustrate the PCA process. All code can be found at the bottom of this post.

As with many of the examples in Dr. Wilks’ excellent textbook, we’ll be looking at minimum temperature data from Ithaca and Canandaigua, New York  (if anyone is interested, here is the distance between the two towns).  Figure 1 is a scatter plot of the minimum temperature anomalies at each location for the month of January 1987.

As you can observe from Figure 1, the two data sets are highly correlated, in fact, they have a Pearson correlation coefficient of 0.924. Through PCA, we can identify the primary mode of variability within this data set (its largest “principle component”) and use it to create a single variable which describes the majority of variation in both locations. Let x define the matrix of our minimum temperature anomalies in both locations. The eigenvectors (E) of the covariance matrix of x describe the primary modes variability within the data set. PCA uses these eigenvectors to  create a new matrix, u,  whose columns contain the principle components of the variability in x.

Each element in u is a linear combination of the original data, with eigenvectors in E serving as a kind of weighting for each data point. The first column of u corresponds to the eigenvector associated with the largest eigenvalue of the covariance matrix. Each successive column of u represents a different level of variability within the data set, with u1 describing the direction of highest variability, u2 describing the direction of the second highest variability and so on and so forth. The transformation resulting from PCA can be visualized as a rotation of the coordinate system (or change of basis) for the data set, this rotation is shown in Figure 2.

As can be observed in Figure 2, each data point can now be described by its location along the newly rotated axes which correspond to its corresponding value in the newly created matrix u. The point (16, 17.8), highlighted in Figure 2, can now be described as (23, 6.6) meaning that it is 23 units away from the origin in the direction of highest variability and 6.6 in the direction of second highest variability. As shown in Figure 2, the question of “how different from the mean” each data point is can mostly be answered by looking at its  corresponding u1 value.

Once transformed, the original data can be recovered through a process known as synthesis. Synthesis  can be thought of as PCA in reverse. The elements in the original data set x, can be approximated using the eigenvalues of the covariance matrix and the first principle component, u1.

For our data set, these reconstructions seem to work quite well, as can be observed in Figure 3.

Data compression through PCA can be a useful alternative tolerant methods for dealing with multicollinearity, which I discussed in my previous post. Rather than running a constrained regression, one can simply compress the data set to eliminate sources of multicollinearity. PCA can also be a helpful tool for identifying patterns within your data set or simply creating more parsimonious representations of a complex set of data. Matlab code used to create the above plots can be found below.

As part of a simulation model our group is building, a drinking water allocation sub-problem must be solved.   Figure 1 is a simplified example of the sort of problem we are solving. 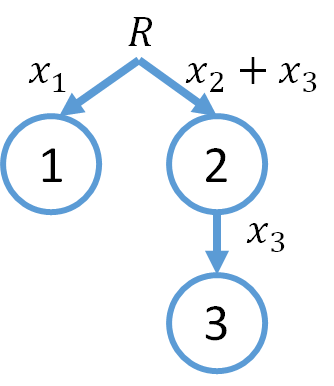 There are three utilities that each have a demand (

). The utilities are connected via some infrastructure, as shown in Figure 1.  When our total available water (

) is in excess of the demand (

), no rationing is needed.  When we do need to ration, we want to allocate the water to minimize the percent supply deficits across the three utilities:

The last constraint here describes the a limitation of the distribution network.  The real problem is much more complicated, but we needn’t detail that here.

This problem needs to be solved thousands, or hundreds of thousands of times in each simulation, so we want any solution technique to be fast.  The natural solution is linear programming (LP), which can solve problems with tens of thousands of variables and constraints nearly instantaneously.

As stated in equation 1, our rationing scheme is indifferent to imposing small deficits across all three utilities, or imposing one large deficit to a single utility.  For example, the objective value in equation 1 is the same, whether each utility has a deficit of 5%, or if utility 1 has a deficit of 15%, and utilities 2 and 3 have no deficit.  In reality, many small deficits are likely preferable to one large one.  So what are we to do?

We could square our deficits.  In that case, our rationing scheme will prefer small distributed deficits over one large deficit:

BUT, we can’t use LP to solve this problem, as our objective is now non-linear! There are non-linear programming algorithms that are relatively fast, but perhaps not fast enough.  Instead we could linearize our non-linear objective, as shown in Figure 2. 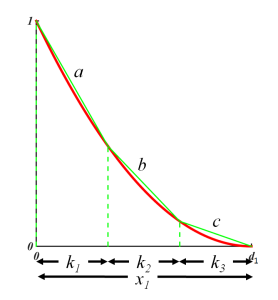 The strategy here is to divide a single allocation,

for instance, into many decision variables, representing different ranges of the actual allocation

.  In each range, a linear segment approximates the actual quadratic objective function.  Any actual release

), and the contribution to the objective function from that release can be approximated by:

If a more accurate description is needed, the range of

can be divided into more segments.  For our purposes just a few segments are probably sufficient.  A similar strategy can be adopted for

.  Of course the constraints from the original optimization problem would need to be translated into terms of the new decision variables.

Now we are adding many more decision variables and constraints, but this is unlikely to slow a modern LP algorithm too much; we are still solving a relatively simple problem.  BUT, how does the LP algorithm know to increase

to its maximum threshold before applying

?  Do we need to add a number of conditional constraints to ensure this is done properly?

It turns out we don’t!  Because our squared deficit curve in Figure 2 is monotonic and convex, we know that slope of the linear segments making up the approximation are increasing (becoming less negative).  Thus, in a minimization problem, the marginal improvement in the objective is highest for the

segment, followed by the

segment, followed by the

segment, and so on.  In other words

.For this reason, the algorithm will increase

to its maximum threshold before assigning a non-zero value to

, and so forth.  No need for complicated constraints!

Now this is not always the case.  If the function were not monotonic, or if it were convex for a maximization, or concave for a minimization, this would not work.  But, this trick works for a surprising number of applications in water resources systems analysis!

If nothing else this simple example serves as a reminder that a little bit of thought in formulating problems can save a lot of time later!

This blog post is part 1 of a multi-part series that will demonstrate how I have coupled a pure Python simulation model with the multi-objective evolutionary optimization algorithm Borg. In this post, I will show how you can access Borg’s serial and/or parallelized (master-slave) implementations through a Python wrapper (borg.py).

Please see this previous blog post for some background about Borg, and how to obtain it. My instructions below assume you have access to the Borg files.

In the setup I will describe below, Borg parameterizes and iteratively refines solutions (e.g., reservoir operating policies) to a problem, optimizing them in response to their simulated performance with respect to multiple objectives.

You will need the following Borg files (see link above for how to download these):

You will need to create the following files yourself (I provide sample code below for these files):

Note that the file and function names above are just example names. You can name the above files whatever you want. Just be sure to modify the code I provide below to reflect the new names.

A sample of code for example_sim_opt.py is as follows:

The following is an example of how you would submit a batch script on a Linux cluster to run a parallelized simulation-optimization experiment using the example_sim_opt.py and borg.py files. Note that in the parallelized version, simulations (i.e., “function evaluations”) are being run in parallel by separate processors.

You would need the following two files:

You could then run the above batch script with a command such as:

For those of you who are not familiar with Project Platypus, its a repository that supports a collection of python libraries for multi-objective optimization, decision making and data analysis. All the libraries are written in a very intuitive way and it is just so slick.

In this post I will focus exclusively on the platypus library which supports a variety of multi-objective evolutionary algorithms (MOEAs), such as NSGA-II, NSGA-III, MOEA/D, IBEA, EpsMOEA, SPEA2, GDE3, OMOPSO and SMPSO. Along with a number of analysis tools and performance metrics (which we will be discussing in subsequent posts).

First you can install the entire framework by typing the following commands on your terminal:

If you have trouble with this first step, please feel free to report it.  The library is still under development and it might be infested with some minor bugs.

I wanted to start this post with a classical allocation problem to illustrate how you would implement your own function and optimize it using platypus.   This example, by the way, was inspired on Professor Loucks’ public system’s modeling class.

We have the following problem:

So, lets find the best allocations using the NSGAII algorithm supported by platypus:

Assuming that you already have Platypus installed.  You should be able to import the classes specified in lines 1-3 in the code above.   The first line, as you can tell,  is were you import the MOEA of your choosing, make sure its supported by platypus.  In the second line, we import the Problem class that allows you to define your own  function.  You also need to import the type class  to specify your decision variables’ type.  The library supports Real, Binary,  Integer, etc.  I define the allocation class in line 5.  In line 8, I specify the number of objectives=3, number of decision variables=3 and number of constraints =1.  The bounds of my decision variables are defined in line 9.  The function in line 12 evaluates and stores the solutions.

Note that for the solution.objectives, each of the objective functions are specified in a vector and separated by a comma.  You can set constraints in line 17.  If you have more than one constraint it will be in the same vector with a comma separation.  In line 19, the function is to be optimized with the NSGAII problem, in line 20 you set the number of iterations for the algorithm, I went up to 100000, it really depends on the difficulty of your problem and your choice of algorithm.  Finally, I print the objective values in line 23, but you can have the decision variables as well if you wish.  As you can see, the setup of your problem can be extremely easy.  The names of the classes and functions in the library are very instinctive and you can focus entirely on your  problem formulation.