This is the second part of a two-part blog post on an open source synthetic streamflow generator written by Matteo Giuliani, Jon Herman and me, which combines the methods of Kirsch et al. (2013) and Nowak et al. (2010) to generate correlated synthetic hydrologic variables at multiple sites. Part I showed how to use the MATLAB code in the subdirectory /stationary_generator to generate synthetic hydrology, while this post shows how to use the Python code in the subdirectory /validation to statistically validate the synthetic data.

The goal of any synthetic streamflow generator is to produce a time series of synthetic hydrologic variables that expand upon those in the historical record while reproducing their statistics. The /validation subdirectory of our repository provides Python plotting functions to visually and statistically compare the historical and synthetic hydrologic data. The function plotFDCrange.py plots the range of the flow duration (probability of exceedance) curves for each hydrologic variable across all historical and synthetic years. Lines 96-100 should be modified for your specific application. You may also have to modify line 60 to change the dimensions of the subplots in your figure. It’s currently set to plot a 2 x 2 figure for the four LSRB hydrologic variables.

To more formally confirm that the synthetic hydrologic variables are unbiased and follow the same distribution as the historical, we can test whether or not the synthetic median and variance of real-space monthly values are statistically different from the historical using the function monthly-moments.py. This function is currently set up to perform this analysis for the flows at Marietta, but the site being plotted can be changed on line 76. The results of these tests for Marietta are shown in Figure 2. This figure was generated from a 100-member ensemble of synthetic series of length 100 years, and a bootstrapped ensemble of historical years of the same size and length. Panel a shows boxplots of the real-space historical and synthetic monthly flows, while panels b and c show boxplots of their means and standard deviations, respectively. Because the real-space flows are not normally distributed, the non-parametric Wilcoxon rank-sum test and Levene’s test were used to test whether or not the synthetic monthly medians and variances were statistically different from the historical. The p-values associated with these tests are shown in Figures 2d and 2e, respectively. None of the synthetic medians or variances are statistically different from the historical at a significance level of 0.05. 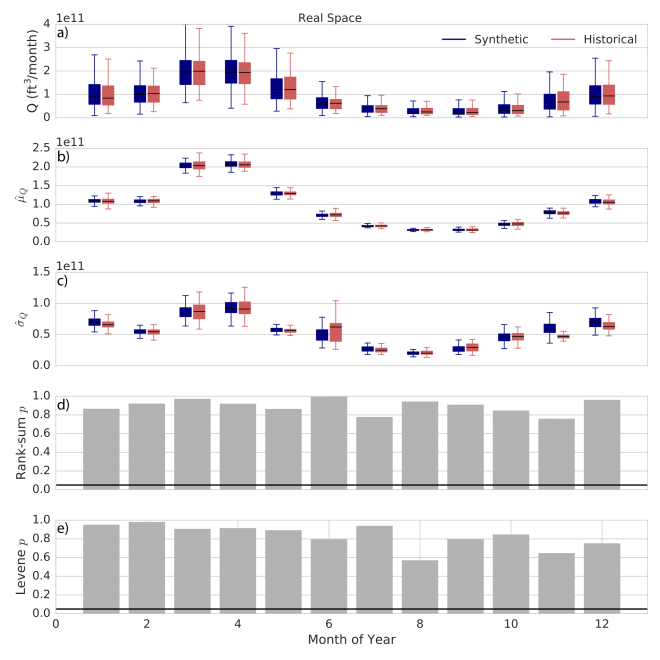 In addition to verifying that the synthetic generator reproduces the first two moments of the historical monthly hydrologic variables, we can also verify that it reproduces both the historical autocorrelation and cross-site correlation at monthly and daily time steps using the functions autocorr.py and spatial-corr.py, respectively. The autocorrelation function is again set to perform the analysis on Marietta flows, but the site can be changed on line 39. The spatial correlation function performs the analysis for all site pairs, with site names listed on line 75.

Figures 4a and 4b show boxplots of the cross-site correlation in monthly (panel a) and daily (panel b) real-space hydrologic variables for all pairwise combinations of sites. The synthetic generator greatly expands upon the range of cross-site correlations observed in the historical record, both above and below. Table 1 lists which sites are included in each numbered pair of Figure 4. Wilcoxon rank sum tests (panels c and d) for differences in median monthly and daily correlations indicate that pairwise correlations are statistically different (α=0.5) between the synthetic and historical series at a monthly time step for site pairs 1, 2, 5 and 6, and at a daily time step for site pairs 1 and 2. However, biases for these site pairs appear small in panels a and b. In summary, Figures 1-4 indicate that the streamflow generator is reasonably reproducing historical statistics, while also expanding on the observed record.